Last spring, I took the 6 train from the periphery of Spanish Harlem to my office in Soho every day. I remember the way I’d limp up the hill at the cross section of 110th Street, peering into the backlit shadow of the subway stop at the end of the street, blasting Bowie classics to cancel out the whisper of catcalls around me. My blouse clung to the small of my back as I entered the station, which was already cramped and humid before dawn. I embarked the vehicle each morning with a leather knapsack, a ziploc bag of grapes for the road, and a pair of kitten heels I’d change into at my second to last stop.

Passengers would come and go as the subway raced and paused between stops. Ninety-sixth. Seventy-seventh. Times Square. My mind welcomed a repeating handful of songs as I clenched the subway pole, lined with a row of clampy fists, swaying between the passengers around me. I’d blast up the volume to cancel the eclectic rock and funk and classic vibrating from the headphones around me, but somehow the traveling musicians always managed to make themselves heard. My neighbors and I would exchange exasperated glances as the singer cranked up the volume of a portable mic and hit the high notes of a wake-me-up nobody asked for before we succumbed to a sigh and eventually an exasperated chuckle under our breath. The off-key tunes would float between the doctors, the students, the homeless, the mesh of arms and legs interlaced throughout the train car. The swarms would proliferate around Times Square and dissipate by Union Square, and I’d ride through the Lower East Side in silence. Astor Place. Bleeker. Spring.

It was always Union Square where I’d run into a coworker or two, recognizing first their purse and then their profile underneath the web of limbs stretching between us. We’d exchange a clenched smile and terse word of acknowledgement, mutually annoyed by the sweaty limbs jutting into our space. Those who keep their eyes off their phone screens for a mere moment compete for an open seat. The thin slivers of space between two passengers, who willingly occupy the extra wiggle room by parting their legs into a wide V, dissipate in a blink of an eye.

Once, seizing a space between two spreaders, I pushed my shoulders back, snuggling comfortably between the passengers beside me, and began my work makeup routine. As their parted thighs sandwiched my legs into a sweaty crisscross, I stretched my elbows farther into their vision, provoking a harmony of grumbles. My war with my neighbors, a series of elbow  juts, thigh squeezes, and passive aggressive grumbles, continued for the duration of the journey. When my two neighbors and I clipped our matching work ID’s onto our lapels moments before arriving at the Canal Street stop, we suddenly recognized each other, our eyes wide and mouth gaping in shock. We exchanged overly exuberant and flustered goodmorning’s to compensate for our behavior before realizing the subway doors at Canal Street had already closed. We arrived at our office seven minutes late in unison that day.

The subway is full of inexplicable coincidences that’ll make you wish you could disappear into the sea of strangers. You might be crying alone on a platform about the tragic mishap of events that seem to shape your life at the moment when a middle school teacher recognizes you and asks how you’ve been. Or you might spot an old friend just as the subway doors close, and see their face burst into excitement before fading into a horizontal blur of colors as the train jolts away. You might feel a light slap on your ankle and look down to find a rat sitting confidently between your sandals, whipping its gnarly tail from side to side. Or you might be reading about the yellow butterflies in Gabriel Garcia Marquez’s 100 Years of Solitude and look up to the gasps of those around you, pointing to a single yellow butterfly flapping out of the train car. I once met a writer named Blue who autographed the chapbook he sold with a Sharpie’d cartoon self portrait. I still remember the triumphant jerk of his hand as he scribbled a cobalt self-portrait cartoon onto his opening reflection, “Corner Stores in the Middle of the Block.” I am still waiting for the day I’ll see him on the train again, so I can tell him that I’ve noticed every corner store incorrectly placed between Papaya King’s and drugstores from the moment I read his piece.

Despite the herds of cockroaches, mysterious stains that appear on your work clothes, and occasional nudity, the subway is strangely surreal in its happenchances and mistakes. New Yorkers are fluid, constantly relocating and seeking the promise of change. Many natives readily embrace a change in scene, jaded by the loudness of the urban routine. They often seek refuge in a space of silence for a bit before returning home— they say the open hills and forest air of my new Upstate home must be a healthy hiatus from the transactions that marked my life in the city. But the truth is, I find the openness here oddly suffocating. I have yet to understand the so-called charm of Ithaca, and I do believe that I’ll one day comprehend the enchantment of a town so captivating it could be named after a mythological land, perhaps after I return home. But in the interim, I find myself craving the self-isolation that came with the subway, a space in which I could be irrelevant, anonymous in solitude amidst a sea of locals in transit.

I remember escaping the voices and smells of Canal Street as I slid into the 6 train station. I’d glance up from my book in relief as I welcomed the familiar scream announcing the train’s arrival, followed by the blaring light of the 6 flashing through the tunnel, my thoughts already trickling into blind silence. The pitter patter of fluids dripping from subway car ventilation, the lull of Beatles songs chanted by soloists in motion, the crushed MacDonald’s bags lining the car’s crannies, the faded neon advertisements promoting car insurance and cosmetic transformations, even the occasional run-in to an old acquaintance or forgotten foe— there’s a familiar anonymity about the crowds of the 6. Days on the subway were packed with movement and transactions and swipes. The pungent odor of collective sweat and curses of train conductors led tourists through a wave of confusion and shock but offered a sense of routine to the locals. There were doctors, students, construction workers, chefs, artists, dogs, babies, and beggars, all just sleep-ridden passengers competing for a spot to rest and a few moments of blankness. 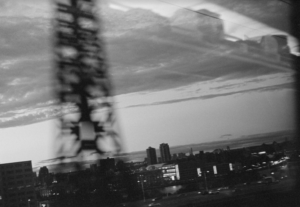 The subway is an anomalous creature in the city— an unparalleled force of democracy that disregards the city’s hyper-awareness of name and status and disobeys the rules of its game. Yet, it is the primary vehicle for its constant hustle-bustle, the agent for transporting us to our final destination. It’s an underground space that fosters an otherwise non-existant subculture of moms and babies and grandmas, bankers and painters and waitresses, blacks and whites and asians, immigrants and locals and city misfits— an underground community of people irrelevant to one another yet united in perpetual transit. Our thoughts turn with the wheels of the train, breaking to harsh halts and rumbling in utter silence, and our lives cross like the underground tracks that speed to new destinations that grow into our daily routines.
When I was a child, my mom would occasionally bring me to work, and I remember the way she would grasp my hand as we leaped on the subway car and fought for mere elbow room in the tightly-packed vehicle. The journey was an utter wonder to me— gross, with its odors and sightings, yet magical, the way the light disappeared from the windows in transit. I was a foreigner then, too, simultaneously dazed and disturbed by the workings of the machine. Its routes, once a labyrinth of twists and turns around the city, have grown familiar, like the veins across my palm, once spontaneous and otherworldly but now a map on the back of my mind.