TRAVELIN’ WITH JACQUELINE | The Summer of Love Experience

Before the contemporary hipster existed, there was the hippie of the 1960s. (Ironically, the term “hippie” was derived from the word “hipster,” which referred to the jazz cats of the 1940s.) Perhaps the most notable year for any hippie is 1967, whenduring which the Summer of Love took place in San Francisco. Hippies from around the country arrived in Haight-Ashbury and the adjacent Golden Gate Park, which, as I write this piece, is hosting the Outside Lands Festival for the weekend.

Because this summer—the summer of 2017—marks the fiftieth anniversary of the Summer of Love, the city of San Francisco has been heavily promoting what has been (if you will, my fellow Warriors fans) dubbed the Summer of Love Experience, much of which revolves around a special (if not once-in-a-lifetime) exhibit of the same name from the de Young Museum, which is opportunely located in Golden Gate Park. And so, on this installment of Travelin’ with Jacqueline, we shall be traveling to not only to another place but toalso another time.

Before my best friend Ashley Duong and I had even stepped foot in the museum, we were met with exterior decorations that began visually transporting us to 1967:

Once we were actually in the exhibit, our attention was immediately caught by this poster in the first gallery: Of course, one of the counterculture’s identifying characteristics was its political stance on the Vietnam War and how that generation used protests as a way of voicing their dissatisfaction. This image is especially striking for modern audiences, as we are living under an administration that is heavily supported by increasingly vocal white supremacists during an era where protests and marches (be they composed of conservatives or liberals) are becoming frequent. Other issues that were discussed and supported by the counterculture included human rights, civil rights, and reproductive rights.

Another way in which ideologies that exhorted acceptance, freedom, and individualism were spread was music, a medium that also served as a vehicle for the development of the visual arts. Upcoming albums or performances by live bands were often promoted through funky and colorful posters, originals and reproductions of which filled an entire room of the exhibit. This part of the exhibit was overwhelming—it induced a sensory overload in me that still doesn’t fully come across in the photos I took.

Although album covers weren’t as visually striking as their poster counterparts, they still contributed to the aesthetic of the counterculture: What further added to the experience of the exhibit were our fellow museum-goers, quite a few of whom were in their seventies and eighties. As Ash and I wandered from gallery to gallery in the crowded and popular exhibit, we couldn’t help but overhear the commentary of other visitors. Ash told me she heard older people catching typos in the informative placards the museum had next to each piece, reminiscing about being in San Francisco in 1967, remembering the day a band released their new album, and recalling attending live performances from their favorite acts. As I was reading and viewing a gallery about how the aforementioned posters were made with handmade lithographs, which are like huge stamps (the Johnson Museum occasionally has free workshops that teach you how to make your own lithograph!), I turned my attention to another wall that showed the different colors and layers of lithographs required to make posters from the 60s:

As I was taking photos of this ever-changing color display, I overheard one woman ask her companion if they could move onto the next room since watching the flashing lights was causing her to recall a bad acid trip she had had back in the day. She said she was starting to feel nauseous, so they walked away. This made Ash and I realize that this was exactly what some other visitors had experienced when they were our age—teens or twenty-somethings. They were reliving their youth by recollecting music performances and drug-induced hallucinations. These were the people who were actually being transported to the past!

Speaking of which, the 60s featured a lot of experimentation with drugs, and one could take some LSD at the aptly named Acid Tests parties, which were promoted with…you guessed it: posters!

There was also a hilarious poster that was advertising free Survival School, which was “designed to save you from becoming a psychedelic casualty”: It was during this time that underground newspapers, such as The San Francisco Oracle, were being produced and distributed throughout the San Francisco Bay Area. In the picture below, a local celebrity named “Jesus” is seen toting issues of The Oracle meant for distribution: A substantive part of the exhibit consisted of mannequins that wore clothes that were actually made in the 60s. A few displays had their own themes, such as denim, knitwear, patterns, suede, and silhouettes. The two below were my favorites:

Perhaps the coolest gallery was the Light Show Room; bean bags and pillows were placed on the floor of the room while four projectors near the ceiling displayed some groovy designs. The artistic process behind these creations involved blobs of paint and water sliding around the surface of bowls as a light bulb illuminated their movements from below. Ash and I sat on the bean bags for about fifteen minutes as we appreciated the colors that took over the room. We also took some time to get in an Instragram-able photo or two: 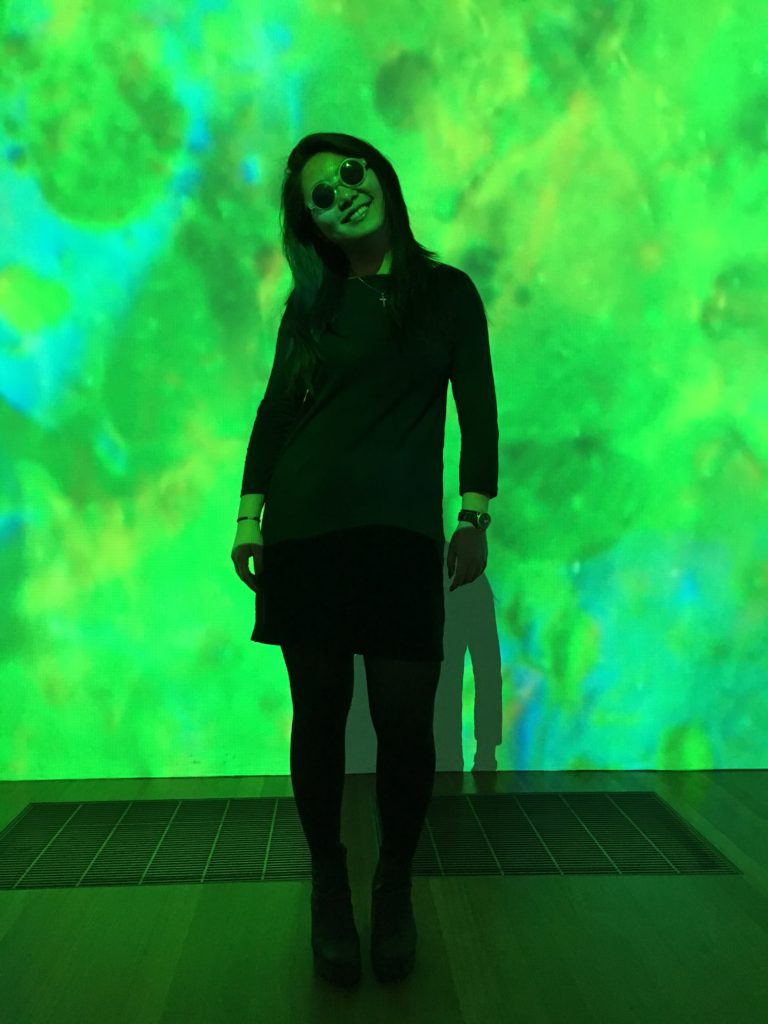 And as a pin collector myself, I couldn’t contain my excitement when I saw these buttons: Buttons, like psychedelic rock music and underground newspapers, allowed hippies to succinctly express their political and cultural messages in a more appealing way. The last item of the exhibit was the denim jacket below, covered in an array of vibrant buttons and patches: After a few weeks of reflecting on the exhibit, I have found that my opinion of it has slightly changed. While I still believe that the de Young provided visitors with a thorough description—an experience—of the Summer of Love, there are a few qualms I have with it. One of the purposes and benefits of having an exhibit about the past is that we have the opportunity to see how certain aspects of that era have aged over time, as well as why and to what extent our own era is different. Some elements age well, and other elements don’t.

Take fashion. While bell bottoms, suede, and tie-dye continue to materialize on the pages of fashion magazines and the racks of clothing stores, I can’t help but wonder how other designs and styles of that decade would fare with modern Americans. Amongst the touted values of the counterculture were consciousness and multiculturalism, which extended into the adoption of Native American, as well as East, South and Southeast Asian, prints. In the context of modern culture, calling these actions a form of cultural appropriation would be totally possible. In fact, this problem continues to plague Americans today, as many Coachella attendees are criticized for wearing dashikis, cornrows, and Native American headdresses to the festival when they themselves have no cultural connection to, much less awareness of, the meaning of the styles they are donning. In this way, reconsidering the past can actually allow us to reflect on the present, so that, in this situation, we might realize how admiration can veer into appropriation.

While I wish the de Young had provided visitors with a more substantive message that could have included criticism of the summer of 1967 and the counterculture movement in general, I also understand that the exhibit was supposed to serve as a zeitgeist of sorts, so that we would immerse ourselves in the hippie experience as it was, not as it should have been. Overall, I can say without a doubt in my mind that I will never forget this exhibit. From seeing genuine articles of clothing that psychedelic rock stars owned to hearing people from the 60s talk about the 60s while at an exhibit about the 60s, the Summer of Love was an incomparably fun yet educational experience.