Although there has been significant progress in recent years, there is still a lack of substantial representation of women and people of color in the entertainment industry. With that being said, podcasts are a cheap, readily disseminated way to share stories and cultural experiences. In addition, they are a medium that offers an opportunity to those who do not have a voice in the traditional media industry, a platform for their thoughts and experiences to be heard. Below are three podcasts hosted by women and/or people of color that bring a voice to those who are underrepresented in the media industry. These podcasters offer their unique perspectives not only to experiences that women and people of color might face, but also to young Americans in our ever-changing and polarizing political climate today.

Another Round with Heben and Tracy 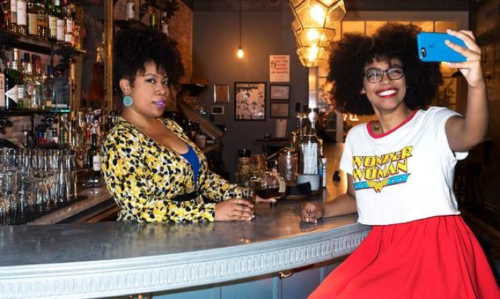 Another Round is a Buzzfeed pop culture podcast co-hosted by writers Heben Nigatu and Tracy Clayton. Every week, Nigatu and Clayton cover topics ranging from the intersection of race and gender to celebrities and pop culture—as well as downing a couple of drinks. Nigatu and Clayton offer listeners their insight into the experiences of being women, people of color, immigrants, daughters, friends, etc. Guests have included many high profile figures such as Margaret Cho, Hillary Clinton, Lin Manuel Miranda, and Ta-Nehisi Coates. What makes Another Round successful is that Nigatu and Clayton bring the perfect balance of serious and focused conversation as well as humor with their easy banter, quick jokes, and segments like the “White Devil’s Advocate,” “Drunken Debates,” “What Had Happened Was,” and much more. Call Your Girlfriend is a pop-culture and political podcast hosted by longtime best friends Aminatou Sow and Ann Friedman and produced by Gina Delvac (who joins in every so often). Friedman, a freelance journalist, and Sow, a digital strategist and Forbes “30 Under 30” honoree, call each other to check in weekly and give listeners the opportunity to eavesdrop on their conversations. Topics they discuss range from pop-culture discussions about the Amber Rose—Blak Chyna—Kanye West—Rob Kardashian—Kim Kardashian (confusing right?) web, to the return of Justin Bieber. They also focus on more serious topics like reproductive health and women’s rights and have candid discussions about current events and politically charged topics like gun control (they had a whole episode). From their origins as a bi-weekly podcast where the hosts simply called to ‘check-up,’ Call Your Girlfriend has undoubtedly evolved. For example, Sow recently having interviewed former Democratic Presidential Nominee (among other things) Hillary Clinton in an almost hour-long discussion where they took the focus off of her loss to Trump, and instead focused on her friendships, authenticity in politics, etc. What makes Call Your Girlfriend such as special podcast is that Sow and Friedman celebrate friendship, womanhood, and inclusivity, never shying away from difficult topics or from making fun of themselves. Code Switch is an NPR podcast produced by a team of six journalists of color (Shereen Marisol Meraji, Gene Demby, Kat Chow, Adrian Florido, Karen Grigsby Bates and Leah Donnella), dedicated to discussing themes of race, ethnicity, and culture. The name of the podcast, which was formerly a blog, originates from the term “code-switching” which involves speakers switching between multiple languages or dialects. In this case, the hosts of Code Switch use their podcast as a means to reflect upon their own many identities and to understand how people navigate through the world, switching back and forth (code-switching) between their many versions of themselves when needed. The hosts connect these themes with current events, politics, and personal narratives.  With their mics, they give a voice to the cultural stories and experiences that people of color face in America. Topics covered have included discussions of police brutality, the removal of Confederate monuments, and the intersection of race and DNA.

Episode Suggestions:
Who’s Your Great-Great-Great-Great Granddaddy?
A Prescription for “Racial Imposter Syndrome”
Nate Parker’s Past, His Present and the Future of “The Birth of a Nation”
Say My Name, Say My Name (Correctly, Please)

Kyla is a member of the class of 2018 and a Communication major in the College of Agricultural and Life Sciences. In her spare time she likes to listen to podcasts and bake. Her blog, Kylie's Room appears every other Thursday this semester. She can be reached at knb56@cornell.edu